Energy in buildings and industry

More efficient use of energy in urban environments

Buildings are the largest energy consumer in the Czech Republic and the European Union, with 40% of energy consumption, overtaking car transport and industrial consumption. It is precisely because of their energy intensity that buildings are key to tackling climate change and their renovation will significantly help to achieve climate neutrality. The announced accelerated renovation of buildings called the “Renovation Wave” is a new plan included under the Green Deal for Europe, which aims to renovate energy inefficient buildings by 2030.

Industry has a key role to play in efforts to mitigate the impacts of climate change. The goal is a sustainable, innovative and competitive industry that will support green and digital transformation. Coherence between industrial, environmental, climate and energy policies is needed for the transition to carbon neutrality to be successful. Industrial modernisation will be strongly influenced by the green and digital transition and will be based mainly on green technologies. It is the development of green technologies that will fundamentally influence the shape of industrial transformation in the coming years.

The panel discussion will be attended by:

The moderator of the panel discussion will be Tomáš Janeba, President of ARI.

00:00:01 Opening
00:04:33 Presentation: Jan Pejter, Division Director and Senior Advisor, ENVIROS
00:18:51 Presentation: Andreas Piontek, Energy Expert - ELENA, European Investment Bank
00:36:48 Presentation: Miroslav Marada, Director of Strategy and Development of ENESA / President of APES
00:48:13 Presentation: David Škorňa, SPARCS project coordinator, Kladno City Council
01:02:38 Presentation: Jan Pavlík, Sales Director, ENVIROS
01:19:20 Opening of the debate
01:19:52 EIB ELENA Technical Assistance - what next? What are the options?
01:27:16 A. Piontek: From your point of view, what would you recommend to Czech municipalities?
01:31:45 What is the experience of the City of Kladno in planning energy efficiency and emission reduction projects? How do you start with the EPC method for public buildings? What would you recommend?
01:37:23 Experience from the Central Bohemian Region? CEBORG - ELENA
01:44:09 How do the economics of EPC projects work? How is the EPC method effective?
02:08:25 Jaká je komplementarita současných programů k Modernizačnímu fondu?
02:16:27 From where will Kladno draw resources for its projects?
02:23:50 How can counties, cities, and municipalities influence county/city transformation in parts they do not own or directly influence?
02:31:14 What should be the role of the city and the consultants?

We don't have any photos for this event yet.

We don't have any news for this event yet.

We don't have any press news for this event yet.

Director of Strategy and Development of ENESA / President of APES

It is no longer possible to ask questions. In case of further questions about the event, please contact dotazy@zelena-mesta.cz .

Energy in buildings and industry 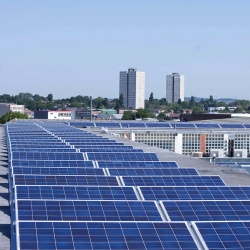 Send questions about the event by e-mail